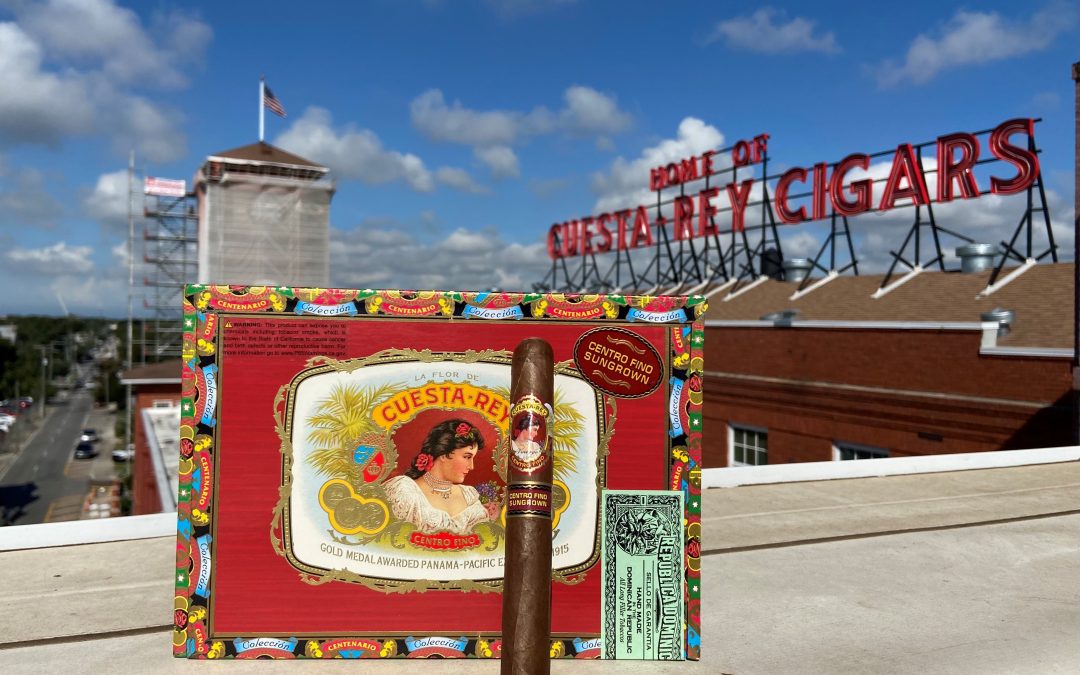 The brand Cuesta-Rey has such rich history. The brand started in 1884 by Angel LaMadrid Cuesta and eventually received the title; “Tobacco Purveyor for the Spanish King and Court”.

Cuesta-Rey cigars have always been associated with premium quality. When Stanford Newman acquired the brand in 1958, he made sure that it remained premium. To this day Cuesta-Rey Cigars are recognized internationally as some of the best cigars in the world. The cigar that I will be reviewing today is from the Centro Fino line of Cuesta-Rey. Centro Fino refers to the center of the tobacco plant, where the leaves are most consistent and rich. The Sungrown Sumatra wrapper is primed from that area of the plant, where the tobacco is most flavorful. Underneath a Dominican binder, a special blend of Dominican Ligero delivers body and strength. This cigar is blended with the intent to be packed with flavor without being too dark or strong. Cuesta-Rey is 136 years old and the Centro Fino is the newest addition to the brand. I am interested in how a brand this old stays relevant in an ever-changing industry.

The Cuesta-Rey Centro Fino is a visually stimulating cigar. The dark reddish wrapper is complimented by burgundy on the first and secondary band. There is also burgundy on the box surrounding Sally who is also pictured on the band.

The packaging is old school and pays homage to the vintage feel of the Cuesta-Rey brand. The cigar itself has good vein structure and a dark rosado tone to the wrapper. The cigar is very oily, and the wrapper has a nice texture. When squeezed, the cigar has a little give. I cannot find any holes or imperfections in the construction. I cut it a few times with a shallow guillotine to get through the sturdy cap for a perfect cut.

The wrapper delivers a sweet and salty taste in the cold draw. There are also some coffee and nutty tones coming from the foot of the cigar. The cold draw seems to stimulate the entire tongue, particularly the areas that deal with sweetness and saltiness. Before even lighting the cigar, I am getting a lot of flavor, and can’t wait to light it up!

Lighting the cigar was especially easy. The foot is easily toasted and develops an even circle even before I take a puff with the torch on the end. The initial flavors I get are earth, coffee, raw cocoa, and a bit of woodiness. This flavor is encased in a sweet and salty package. It leaves the tip on my tongue tingling afterwards.

The amount of smoke coming from the foot is significant. Smelling the smoke delivers a good whiff of mostly damp leather. Everything is very rich and oily. The burn is nice and even which is to be expected based on how the cigar lit. The draw is rather perfect. A double puff gives the cigar a little spice and a minimal bite. S

So far, I am finding the cigar to me very medium in flavor and intensity. The smoke is easily retrohaled in the first third and the flavor stays consisted through the nose. The ash is a slightly darker grey color and has a nice, sturdy formation. I ashed the cigar right before the end of this portion and had to touch up the burn on one side. This isn’t uncommon for such an oily cigar. My impressions after the first portion of this cigar are positive. Most notably I am impressed with how smooth yet flavorful the cigar is. 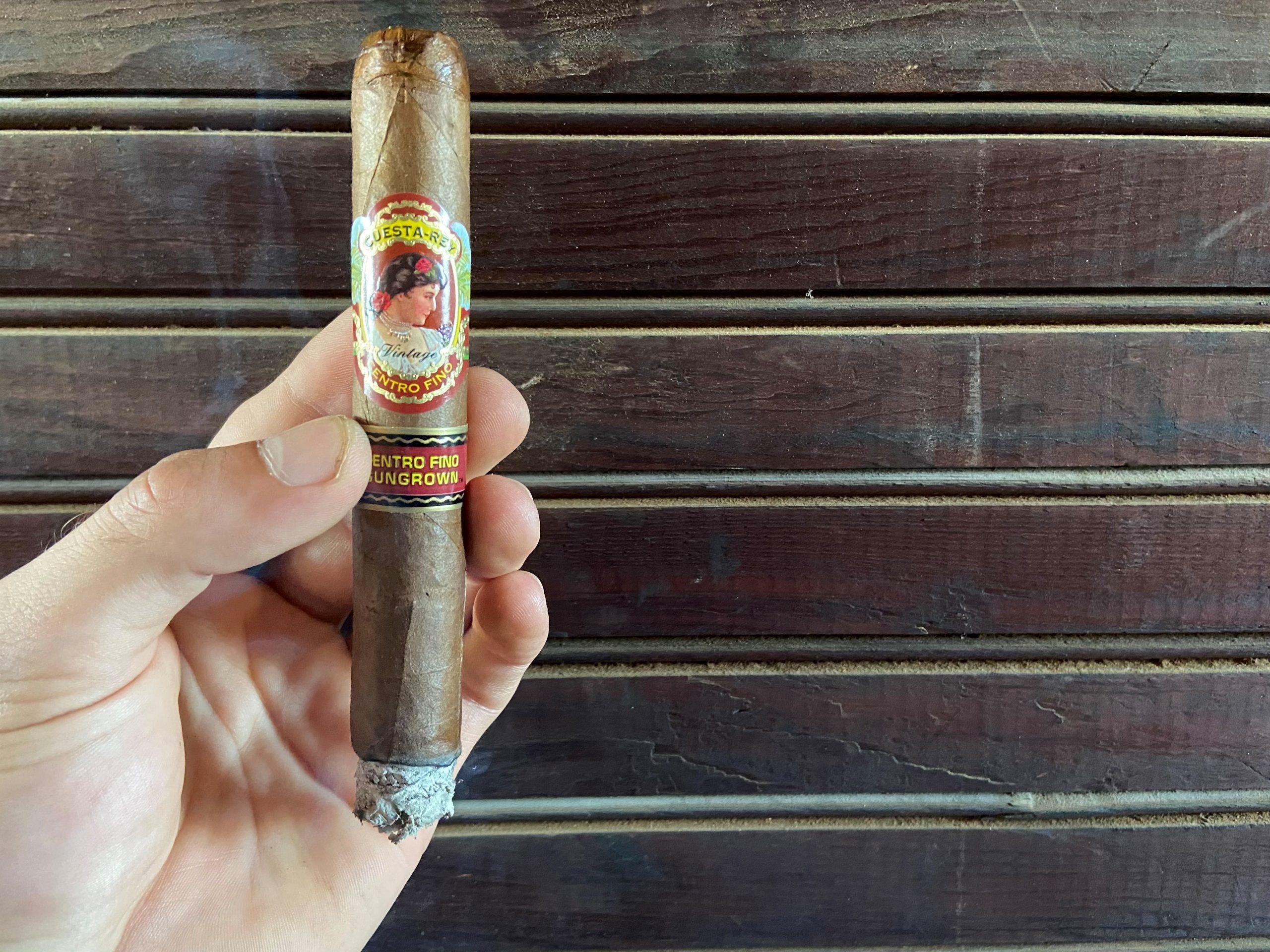 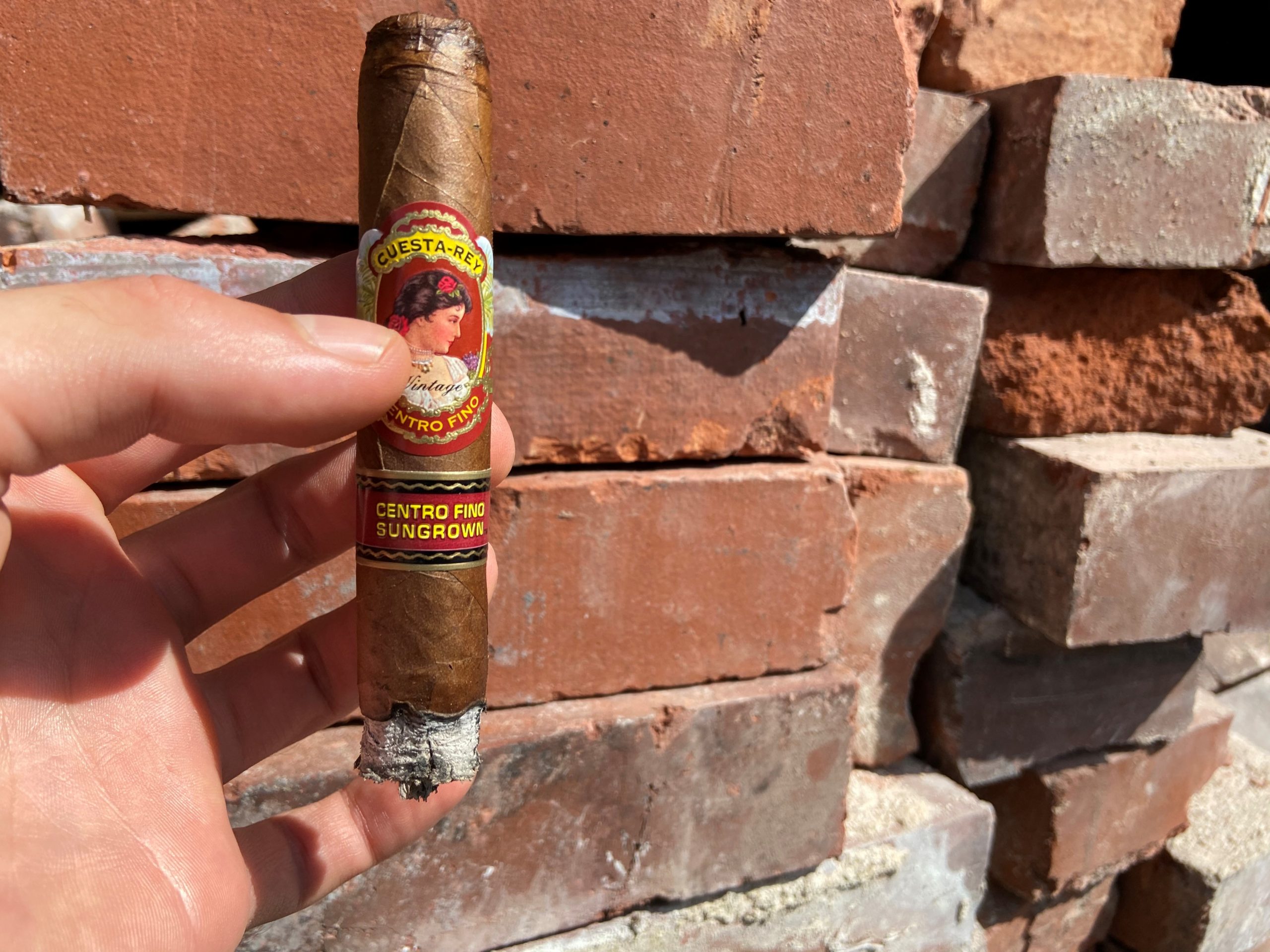 Entering the second third of the cigar I notice a smooth transition into a slightly different experience. The most drastic change would be the sweetness dissipating slightly. Nuts, coffee, and raw cocoa are the main components. There is still a bit of savory, saltiness to be had while smoking and on the finish. The strength has become medium to full, with the flavor remaining medium. Retrohaling is still a treat during this portion of the cigar although there is a bit more intensity that leaves my nose tingling. I am a fan of this change although it is rare that a cigar is stronger during the second third. I’d also like to note that the transition was on the slower side; it wasn’t shocking when the change was noticed.

The ash holds true to the same standards as the previous portion. The burn remained even throughout the entirety of the second third. The draw seemed to remain perfect according to my standards. The burn rate is also a worthy mention. So far it is burning just slow enough to keep everything fresh and burning at a cooler temperature.

During the start of the final third of this cigar I am noticing only a slight difference between the first third. The flavor was nearly identical with earthy coffee and nutty cocoa being the foreground of the flavor. There are also hints of leather and wood lingering in the background. The sweet and saltiness on the other hand, have become very faint. It is not bitter, but the tanginess has nearly dissipated. I find there to still be some saltiness here and there which keeps the front portion of my tongue stimulated.

The burn required no touch ups during the final third. A razor-sharp burn has kept everything even and pleasant until the very end. The draw has stayed the same and the smoke output fills the room with damp smoke. All these contributions make for a very enjoyable experience until the very end. 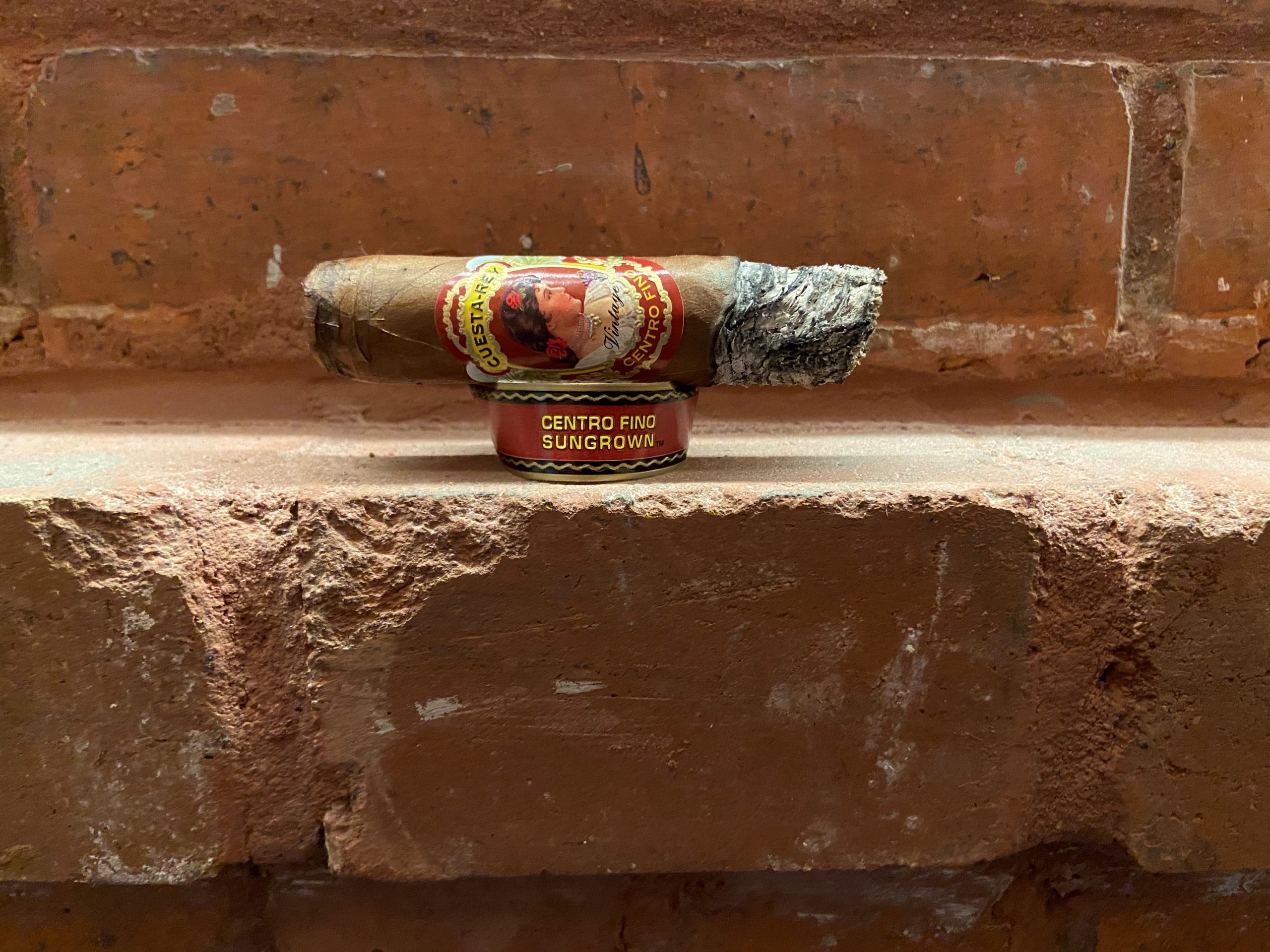 The Cuesta-Rey brand is so full of history. It all started in 1884, making the brand 136 years old. I can’t think of any other brand that has remained relevant in the market for so long. The Centro Fino Sungrown was the most recent addition and I think it holds up to any other comparable cigar in today’s day and age. The cigar starts out medium, then slowly ramps up the intensity, and then mellows out at the end. I find this to be a perfect execution of the smoking experience. The sweet and salty flavor coming from the wrapper is unique. I can’t think of any other cigar that mimics this even remotely. It just reinforces my belief that J.C. Newman Cigar Company has a vast portfolio, with a cigar out there for everyone.

Although the Cuesta-Rey Centro Fino line only has three facings, it is packaged in a single row of ten cigars. This means that it will still take up enough space to catch the eye of the customer. The dark red boxes compliment the dark brownish red wrapper. I think it looks great on the shelf. One of the advantages of selling Cuesta-Rey Centro Fino and Centenario is that they come in boxes of ten. This means that it is an affordable box for any customer. The retail falls fairly below the $100 mark. Whether you are having a small gathering or need some variety in your humidor, you will find that the Cuesta-Rey Centro Fino fits the bill (literally). 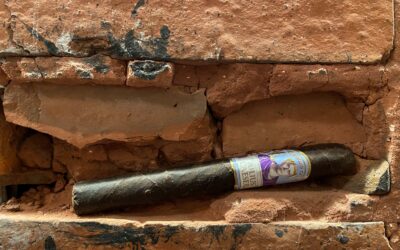 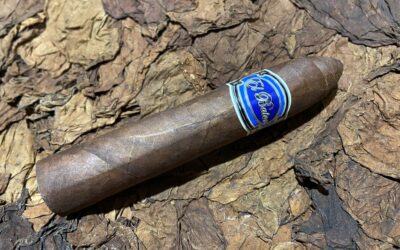 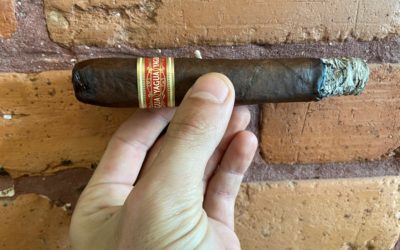